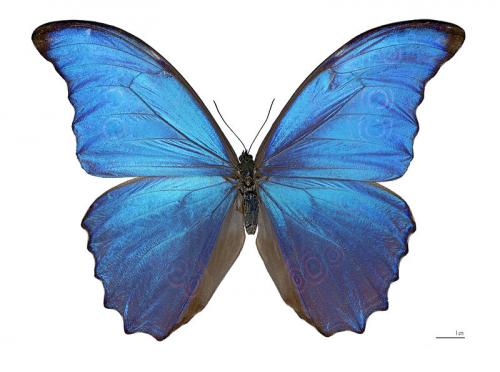 (Phys.org) —A pair of researchers with the Florida Museum of Natural History at the University of Florida has conducted a through genetic analysis of butterflies and moths and in the process has revealed some of their evolutionary history. In their paper published in Proceedings of the Royal Society B: Biological Sciences, Akito Kawahara and Jesse Breinholt describe the DNA analysis they undertook of the insects and the results they found in doing so. Butterflies and moths are among the most cherished of insects, the researchers note, due to their beauty and relationship to equally lovely flowers. All told there are approximately 160,000 known species of the insect, though many more have not been identified—some scientists suggest there could be half a million. Despite their widespread popularity, the evolutionary relationship between the two (moths and butterflies) has been difficult to estimate—very few fossils exist due to their extremely fragile body and wing structures and the lack of thorough DNA studies. In this new effort, the team in Florida set out to more firmly establish the evolutionary tree of the wispy creatures. The two researchers sequenced almost 3000 genes creating in the process a dataset that included 46 taxa that combined 33 new transcriptomes with 13 genomes, expressed sequence tags and transcriptomes. They used a technique known as HaMStR (a next-generation sequencing approach) to identify 2,696 genes for inclusion into their phylogenomic analysis. Their study showed that butterflies all share a single common ancestor and give credence to the theory that butterflies are more closely related to very small (micro) moths, rather than those of larger species, contradicting previous studies that had found the opposite to be true. More specifically, they found evidence that suggests plume and geometroid moths are likely the first relatives of butterflies. Also, the research showed that insects known as hedylids, commonly known as butterfly-moths are in fact true butterflies, not moths at all. The overall result of the work was what the duo describe as the "first robust, transcriptome-based tree of Lepidoptera"—one that strongly contradicts the placement of butterflies in the historical context. It also provides an evolutionary framework, they note, for future research efforts—be they developmental, genomic, or ecological—for both butterflies and moths. More information: Phylogenomics provides strong evidence for relationships of butterflies and moths, Proceedings of the Royal Society B, rspb.royalsocietypublishing.or… nt/281/1788/20140970 AbstractButterflies and moths constitute some of the most popular and charismatic insects. Lepidoptera include approximately 160 000 described species, many of which are important model organisms. Previous studies on the evolution of Lepidoptera did not confidently place butterflies, and many relationships among superfamilies in the megadiverse clade Ditrysia remain largely uncertain. We generated a molecular dataset with 46 taxa, combining 33 new transcriptomes with 13 available genomes, transcriptomes and expressed sequence tags (ESTs). Using HaMStR with a Lepidoptera-specific core-orthologue set of single copy loci, we identified 2696 genes for inclusion into the phylogenomic analysis. Nucleotides and amino acids of the all-gene, all-taxon dataset yielded nearly identical, well-supported trees. Monophyly of butterflies (Papilionoidea) was strongly supported, and the group included skippers (Hesperiidae) and the enigmatic butterfly–moths (Hedylidae). Butterflies were placed sister to the remaining obtectomeran Lepidoptera, and the latter was grouped with greater than or equal to 87% bootstrap support. Establishing confident relationships among the four most diverse macroheteroceran superfamilies was previously challenging, but we recovered 100% bootstrap support for the following relationships: ((Geometroidea, Noctuoidea), (Bombycoidea, Lasiocampoidea)). We present the first robust, transcriptome-based tree of Lepidoptera that strongly contradicts historical placement of butterflies, and provide an evolutionary framework for genomic, developmental and ecological studies on this diverse insect order.

Take the Outdoors Back with Hulett’s Mosquito Reduction Service